Single cell analysis enables researchers to gain novel insights across a diverse set of research areas, including developmental biology, tumor heterogeneity, and disease pathogenesis and progression. It permits comparisons of the transcriptomes of individual cells and allows assessment of transcriptional similarities and differences within a population of cells.  Because of technological breakthroughs such as single cell isolation, whole transcriptome amplification (WTA), and NGS library preparation, experiments using single cells are now possible – opening a wealth of exciting new insights for you to discover.

Quick Biology’s single cell/low-input RNA-seq (scRNA-seq) service enables the reliable investigation of the transcriptome from a single cell to a low amount of RNA with minimal bias. It also allows you to uncover more of the transcriptome with the same sequencing depth, and delivers data including both mRNA and lncRNA, enabling the analysis of this important class of regulatory RNAs.

·         Fewer sequence errors – this is perfect for viral genome sequencing

Our scRNA-seq is suitable for transcriptome amplification for the analysis of:

Note: Not recommended for tRNAs, miRNAs, severely degraded RNA, RNA from FFPE material or samples fixed by formaldehyde, glutaraldehyde or other fixatives.

We follow a complete WTA workflow from cell lysis, gDNA removal and cDNA synthesis to highly uniform amplification across the entire transcriptome in a one-tube protocol – with negligible sequence bias.

b.Alignment to a reference with mapping statistics

i.  Final project report with analysis methods and results

Unlock the full potential of your RNA-seq experiment for both lncRNA and mRNA:

The mapping result shows the number of detected transcripts. Single cell libraries were prepared from PBMCs or total RNA from PBMCs and sequenced on NextSeq. Plotted is the % of reads that map to different RNA biotypes. Besides reads mapping to annotated protein-coding genes, it also unlocks non-coding lncRNA and lincRNA, which can deliver an additional level of insight. 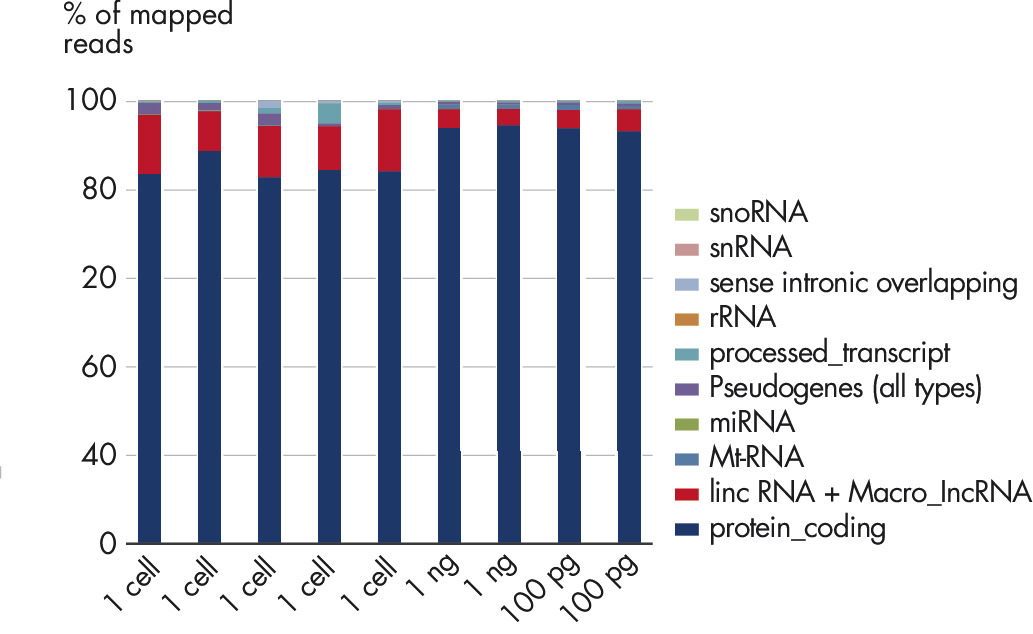 About 3-4 weeks, depends on the quality of submitted samples, one additional week for data analysis.